Object of the Month: November 2020

We’re sure you’ve all noticed the turning of the weather as winter creeps in this November! Our ‘Object of the Month’ is a set of framed tiles depicting the ‘Four Seasons’ by Kate Greenaway, which are represented by the change in landscape, weather and clothing in each illustration. The final tile, ‘Winter’ depicts a girl wearing a warm coat, hat and muff walking in the snow, bracing herself against the freezing winter weather.

Having attended the Royal Female School of Art and then the Slade School of Fine Art, Kate Greenaway became one of the most talented and celebrated children’s book illustrators of the Victorian period. Her style became associated with quaint depictions of children in imaginary 18th-century costumes which were fashionable both in England and internationally. By the 1880s, Greenaway was one of the most renowned bookplate illustrators, for which she combined her quintessential style with art nouveau elements, rather like these tile designs.

Wall tiles became very popular in the later 19th century, largely as they were considered hygienic and washable, and were most often found on fireplaces or washstands. Using tiles in interior decoration was hardly new for the time, however new cast-iron grates were specifically designed to be set with tiles and pictorial examples such as these came to decorate many Victorian households. Tiles could also be mass-produced with ease during this period, facilitated by new methods of manufacture that enabled high-quality and consistent production.

Although the fireplace today has no doubt altered drastically, with few illustrated tiles in sight, we hope that you all enjoy cosy nights in by the fire as the weather gets colder this November. 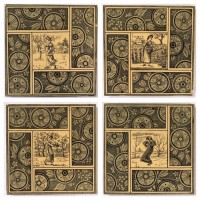