Our Object of the Month is this delightful oil painting by amateur artist Kenneth Shirley Smith (1900 - 1987) of the Vale of Health Fair (1938). The fairground is situated just north of the Vale of Health Pond and brought many day trippers out of London. Hampstead's fair grounds securing Hampstead as a desirable holiday destination. While fairs originated as markets, they became places of fun and pleasure in the 18th century. With the inventions of steam powered rides in the 1860s and moving pictures and electric lighting by the 20th century, the fairground remained a place of intrigue, excitement, and escapism.

This painting depicts a vibrant setting at the Vale of Health Fair in the year before the Second World War. With anxieties rising as talks of another war simmered, activities like this funfair would have provided a much-needed escape. This fair, the sunshine, and tranquillity would have worked wonders for the wellbeing of London's working class population in a time of anguish and adversity. We hope the bright colours bring some joy to your life today! 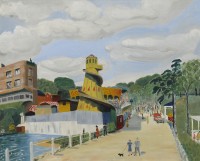