If you follow us on social media you may have seen our post this week celebrating the anniversary of the birth of British artist Sir Stanley Spencer, who was born on 30th June 1891. We shared this wonderful photograph from our collection which shows Spencer at work in the Vale of Health, Hampstead, watched by a curious young art admirer. You can just about see part of the famous painting he is working on; can you tell what it is?

One of the most important 20th century artists, Spencer studied at the Slade School of Art. He was renowned for his work as a war artist and for his paintings of biblical scenes re-enacted in the streets of Cookham, where he was born. He spent a lot of time in Hampstead, having met his first wife Hilda Carline in 1919 at her family home on Downshire Hill, and was therefore familiar with the sights and sounds of the local area and the heath. The painting depicted in the photograph is one of Spencer's most iconic works, 'Helter Skelter' (1937) a famous ride at the Vale of Health Fair. It is an extraordinary example of Spencer's work and is now in the Graves Gallery, Museums Sheffield.

The Burgh House collection also contains a group of fascinating objects relating to Spencer's relationship with Hampstead artist Daphne Charlton, with whom he had an affair. The objects - a decorative jacket, a hat with a pink rose and veil, and a Chinese porcelain bowl - can be seen in Spencer's remarkable portrait of Daphne, which is now in the Tate. After meeting Daphne and her husband George in 1939, Spencer visited them regularly at their home in New End Square, Hampstead. He helped them to hand paint the wallpaper that decorated their home, of which there is also a piece in our collection.

In July that year, the three artists went on a painting holiday in the rural village of Leonard Stanley, near Stroud in Gloucestershire where they stayed at the 'White Hart Inn'. They remained there until after the outbreak of the Second World War, returning to New End Square over Easter in 1940. Here Daphne sat for her portrait every day for two to three weeks. The hat, which was bought especially for the painting in a shop in Bond Street for three guineas, and jacket feature prominently and the bowl can be seen behind her on the mantelpiece. 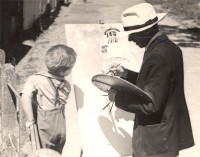 Stanley Spencer at Work in the Vale of Health