Burgh House was built in 1704 during Queen Anne's reign. The area was flourishing at the time as the site of Hampstead Wells, a fashionable spa.

In 1704, Henry and Hannah Sewell moved into brand-new Burgh House, built on land reclaimed from Hampstead Heath. Henry Sewell was in poor health and died only four years later. Hannah continued living there until 1720.

In 1720, Hampstead Wells' chief physician Dr William Gibbons (1649-1728) moved to Burgh House with his wife Elizabeth. At this time, the Spa was flourishing. He was one of the first doctors to praise the foul-tasting 'chalybeate' water, soon after the Wells opened in 1698. He said that,

'... they were full as efficacious in all cases where ferruginous waters are advised as any chalybeate waters in England, unless Scarborough Spa, which is purgative.'

Gibbons' praise of the local water most likely helped to inflate his income, enabling him to work on Burgh House. He added wood panelling to the rooms and hallways and the wrought-iron gates to the entrance, which bear his initials. In 1728, Gibbons died at the age of 79. His wealthy wife remained in the residence for a further 15 years, and after her death, it was bequeathed to her great-niece, who rented it out to Nathaniel Booth.

In 1743, the Whig Politian Nathaniel Booth (1710-70), along with his new wife Margaret, began renting Burgh House. They had three children while living in the house. In 1758, Booth became Lord Delamer and so moved his family to Dunham Massey in Cheshire. The family’s imposing yet crumbling tomb lies in Hampstead Parish Churchyard.

From 1758 onwards, the house was occupied by a variety of professionals, most notably Israel Lewis (1748-1820) and his wife Sarah, who were the longest inhabitants of the house, living there from 1776 until Lewis’ death in 1820.

Israel worked as an upholsterer in Fleet Street. The Lewis family were locally famous for their good deeds – especially for helping John Keats and his brothers when they were living in poverty in nearby Well Walk. Keats noted in his diary that, ‘Mr Lewis has been very kind to Tom all the summer ... sending some fruit of the nicest kind’. The fruit sent to the dying Tom Keats was undoubtedly from the Burgh House orchard.

Lewis was an ardent supporter of the nonconformist Rosslyn Hill Chapel and, in 1816, saved the congregation by buying its tenancy agreement. His only misdemeanour came when he was charged and found guilty of ‘making an enclosed dungstall in his garden’. He was fined £5 and forced to remove it.

In 1822, two years after Lewis’ death, the house was sold to the Rev. Allatson Burgh (1769-1856) for £2,546. He had been working as the vicar of St. Lawrence Jewry since 1815. By changing the liturgy in his church, he made himself so unpopular that his parishioners unsuccessfully petitioned Queen Victoria to have him removed. The composer and organist Samuel Wesley was a frequent visitor to Burgh House at this time; he described Burgh as ‘an odd fellow ... and as diverting as Punch’.

In 1829, Burgh helped prevent the Lord of the Manor from building on the Heath.

By 1854, the House was in trouble – according to Manor records, it had fallen into a ‘very dilapidated and defective state’. Two years later, Burgh died at the age of 86. He is buried in the crypt under Hampstead Parish Church.

In 1858, a very decrepit Burgh House was taken over by the Royal East Middlesex Militia. It served as the headquarters and officers' mess, while sergeants and bandsmen moved into a new building on Willow Road (now known as Willow Hall). Two new barrack blocks were erected in front of Burgh House, with a high wall continuing along Well Walk.

The Militia was an independent army, which formed and reformed whenever a French invasion appeared imminent. The rank and file were called up every summer for training – which mostly consisted of drilling and rifle practices on Hampstead Heath. This, along with their anti-social behaviour when off-duty, became a big problem for the local community.

In 1880, when it was proposed that Burgh House might become the new brigade headquarters, there was such a substantial local outcry that, in 1881, the Militia left Burgh House for good.

In 1884, the house returned to domestic use when Burgh House was bought by the West India merchant and magistrate Henry Goodwin Rooth (1861-1928), who also owned the nearby Weatherall House.

Rooth’s first tenants were Thomas Grylls (1845-1913), his wife Jane and their nine children. Grylls was a distinguished stained glass designer and painter. The Burlison and Grylls company designed windows for churches all over the country – including the renowned rose window in the Poet’s Corner in Westminster Abbey in 1902. The Grylls family were very musical, often holding concerts by distinguished musicians in the Music Room.

In 1897, the Grylls family moved out. In 1984, a century after their arrival, 300 of the family’s descendents held a reunion at Burgh House.

In 1906, Dr George Williamson (1858-1942), his wife Louisa and their three children moved into Burgh House. Williamson was an international art expert, specialising in portrait miniatures and trade tokens. He wrote over a hundred books, including one about Wedgwood’s Frog Service – a 980-piece dinner set from 1774, which included plates illustrating 27 views of Hampstead, five of which depicted Burgh House itself.

Upon arrival, the family immediately transformed the Music Room into a vast art library, holding around 12,000 books. Williamson filled the house with his personal collection of antiquities – including a spinet once owned by one of George III’s daughters, which she supposedly played to soothe his madness. Williamson commissioned Gertrude Jekyll to design the garden – of which the terrace still remains. In 1924, the Williamson family left Burgh House for Guildford in Surrey.

In 1925, Captain Constantine Evelyn Benson CBE DSO (1893-1960) and Lady Morvyth Benson bought the house from Rooth for £4,750. Benson was a director of Lloyd's Bank as well as of Robert Benson & Co. and other companies.

Soon after their arrival, the Bensons built the present Music Room on the site of Dr Williamson's library. They lined it with eighteenth-century panelling taken from Weatherall House, which they had also acquired.

Benson’s daughter, Lady Gillian Tomkins of Winslow Hall, recorded her childhood memories of living in the house for Burgh House & Hampstead Museum. She said that she remembers particularly enjoying the visits to the house by famous people, 'such as one or two royals … including the Prince of Wales' – as well as loving the impromptu musical evenings with Hutch and Cole Porter.

In 1933, Rudyard Kipling’s daughter Elsie Bambridge (1896-1976) moved into Burgh House with her husband Captain George Louis St Clair Bambridge (1892-1943). Kipling, the writer and poet most famous for The Jungle Book, was a regular visitor to the House. Elsie Bambridge later wrote:

'Our life in the delightful old house and garden in Hampstead was a source of happiness to my father to the end of his life.'

Kipling’s last outing was a visit to Burgh House in January 1936 to comfort his son-in-law, who was in bed with bronchitis. The following day, the writer was rushed to hospital, where he died a few days later.

According to an article in the Antique Collector from August 1937, the Bambridges had:

'... furnished the house sympathetically with antiques and done much to preserve its atmosphere of the past ... In the hands of its present occupants, it is a place where one can forget the hurly-burly of London ... and sense a respect for the craftsmanship, imagery and colour of a less shallow era than our own.'

In 1937, the Bambridges left Burgh House for Wimpole Hall, near Cambridge.

'Unless a purchaser can be found for Burgh House – perhaps the best Queen Anne house in Hampstead – there is, I am told, every likelihood that it will fall into the hands of speculative builders ... A petition has been launched to raise funds enough to turn Burgh House into a museum.'

No purchaser came forward and so Burgh House remained unoccupied throughout the Second World War, except by fire watchers for emergency use. Though bombs fell all around it, damaging much of New End Square, Burgh House was mercifully spared.

In 1946, Hampstead Borough Council announced plans to restore Burgh House and use it as a community centre. The Council spent £6,000 on restoration work.

Over the next 30 years, Burgh House became a popular destination for meetings, wedding receptions and parties.

In 1977, Burgh House was closed indefinitely when Camden Council (who had taken over from Hampstead Council in 1965) discovered dry rot in the building.

Threatened with proposals to sell the house to a private company, a number of local residents banded together to form the Burgh House Group, chaired by David Sullivan QC. They launched an appeal to save the House for public use, using the slogan 'Keep Burgh House'. They organised a variety of cultural events, for which they utilised the help of local celebrities, including Judi Dench. The campaign was supported by the Heath and Hampstead Society and the Hampstead and Highgate Express.

By 1979, the group had raised around £50,000 and so Camden Council agreed to lease Burgh House to the newly formed charity, the Burgh House Trust. The many supporters of the project formed the Friends of Burgh House and got to work refreshing the House. On 8th September 1979, Burgh House & Hampstead Museum officially opened to the public.

In recent years, the 300-year-old building has required various refurbishments and improvements. Plans were drawn up to add a new extension, with level entrance from the street, to the rear of the building in order to provide disabled access. The standards of display and conservation of Hampstead Museum also needed to be updated to suit current requirements. The £800,000 scheme – which received generous backing from the Heritage Lottery Fund, the Burgh House Trust and many other local benefactors – was formally opened to the public on 16th July 2006. 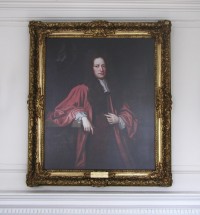 Dr William Gibbons, Copy (original is at the University of Oxford)